ONE of Yorkshire’s most historic private homes, the former residence of wealthy, internationally-known benefactors, the Bomanji family, has been acquired in a multi-million pound private sale through a local law firm. 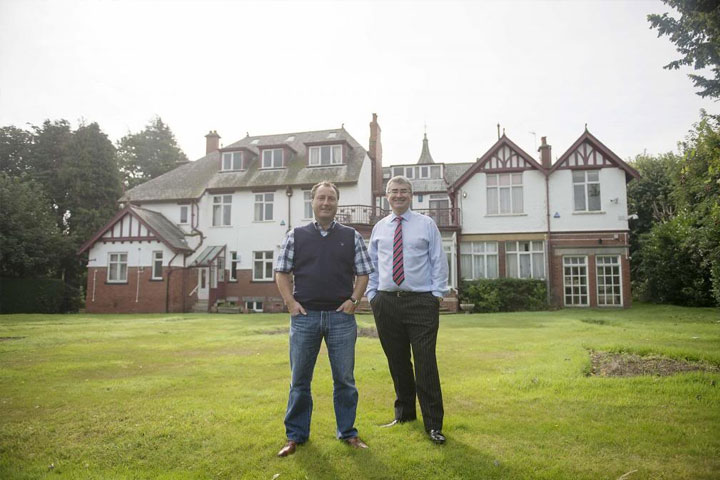 Articles were also featured in the Harrogate Advertiser and the York Press.

ONE of Yorkshire’s most historic private homes, the former residence of wealthy, internationally-known benefactors, the Bomanji family, has been acquired in a multi-million pound private sale through a local law firm.

The 12-bedroom Pineheath, Cornwall Road, with its distinctive minaret, which until, World War II, was covered in gold leaf, and 1.3-acre grounds was the home of Bombay shipping magnate, Sir Dhunjibhoy, who was knighted in 1922 for his services to Britain, and his wife, Lady Frainy Bomanji, friends of the Royal Family and well-known benefactors and supporters of local charities.

Pineheath, which still has the original gold-plated taps, ornate carved ceilings, decorated with gold leaf; upstairs ballroom and balcony, observation tower and garages with central heating for Rolls Royces, was sold following the death of the occupier, Sir Dhunjibhoy and Lady Bomanji’s daughter, Mrs Mehroo Jehangir, in 2012. She was believed to be in her 90s.

The 17,000 sq ft, 40-room, three-storey Pineheath, which became the Bomanji family home in 1927, has additional three-bedroom chauffeurs’ accommodation and gardeners’ cottages. The house has been acquired by local businessman, Jason Shaw, in a deal handled by two firms within the Newtons Solicitors Group, which exchanged contracts in seven hours.

The property also housed a Steinway grand piano which once belonged to a German Kaiser and will be offered by London auctioneers, Christies, later this year. Other features include gold leaf monogrammed wall paper and numerous paintings and China featuring the Queen and other members of the Royal Family.

Mrs Jehangir, who took over Lady Bomanji’s good works after her death in 1986,  left Pineheath little changed from its heyday in British pre-World War II high society including a 1920s internal telephone system with a number still listed for the room of Sir Dhunjiboy, who died in 1937.

After continuing Sir Dhunjibhoy’s good works, Lady Bomanji was given an Honorary Freemanshjip of The Borough by Harrogate Council in 1984.

Jason Shaw, who plans to upgrade the site as a luxury family home, says: “My parents taught me the value of working hard to achieve your dreams. Owning property is most people’s dream and my aspirations have hit a high in buying Pineheath. It is hard to imagine anyone could build a home like this today.  I’ve never been handed two suitcases filled with door keys on acquiring a property before.

“Sadly, it is in a poor state of repair and we will not be able to achieve the opulence of Sir Dhunjibhoy’s time. He was a billionaire in today’s terms. The family divided their time between homes in Windsor, Poona, near Mumbai and Harrogate all of which had full-time staff.

“What is fascinating is that so little has been done to update the property which is like an mid 20th century time-capsule with items such as magazines and programmes for the Harrogate International Festival which date back 60 years still on the shelves.”

Harrogate local historian, Malcolm Neesam, says the property was built  in the late 1890s on land leased from the Duchy of Lancaster by a Mr. G. S. Saynor, although it is not known if he was the builder who then leased the property or if he lived there.

Newtons solicitors managing director, Chris Newton, says: “There was a lot of interest and a race to exchange contracts. Pineheath is very special and, to achieve our clients’ aims, two of our firms, Hodgsons & Mortimer, Darlington and Newtons, Knaresborough, exchanged contracts in a single working day. This was possible because of the size of our property team and the experience of our solicitors.

“The property is awe inspiring and the sale became very special for each of our solicitors involved in it. It is touching how Mrs Jehangir allowed it to become a time capsule. One can only assume that, as she got older, she wanted to keep it untouched in memory of her illustrious parents.”